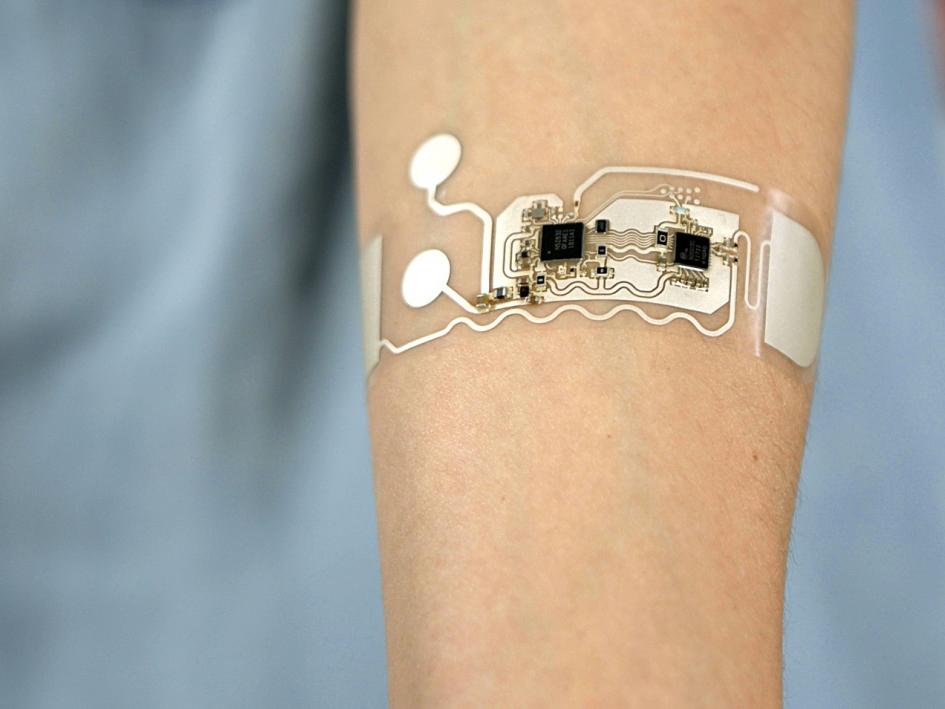 GE Healthcare is creating the next generation of patient monitoring with wearable sensors. In the future, light-weight, even printable technology could help in ensuring patients’ safety in recovery after medical operations. Monitoring technologies offering precision in performance could give healthcare officials new possibilities to monitor patients from afar. These aspects are the core of VTT and GE Healthcare’s highly ambitious and dynamic partnership.

We are used to the idea that after a surgery, patients are bed-ridden, often hooked to several machines. Moving around independently is difficult with cables tethering patients to their bedside devices.

The solution could be wearable technology, where new era of comfortable, lightweight wireless sensors could soon give newfound freedom to patients.

“This is the change we want to see – changing the whole concept of monitoring the patient’s condition,” Erno Muuranto, Managing and Engineering Director at GE Healthcare Finland explains. “We’re moving from the world where patients are hooked up to monitors into a new world where patients are free to move around in hospitals.” This has a huge impact on patient care – patients can feel less ill when they’re allowed to move around.

Another major impact wearable sensors can have is related to safety. Current standard of care in surgical wards leaves the patients unmonitored most of the time during their stay, leaving them vulnerable to unnoticed deterioration. Wearable technology that continuously monitors these patients can give indication to early signs of deterioration, lowering risks of complications and potentially helping patients recover faster. We’re moving from the world where patients are hooked up to monitors into a new world where patients are free to move around in hospitals. Erno Muuranto, managing and engineering director of GE Healthcare

VTT is a strategic development partner in upscaling ideas

When choosing a partner to take these new wearable technologies further, VTT’s name quickly emerged. “We work with several science institutions globally and VTT’s name and their reputation as a highly qualified and competent organization is well-known everywhere,” Muuranto states. “Another reason we chose VTT as our partner was that VTT has already done the research and has the infrastructure on printed electronics, including a PrintoCent pilot manufacturing facility in Oulu that can actually demonstrate the manufacturing of the wearable sensors.”

The topic of wireless sensors is highly relevant during a global pandemic. If intensive care units are full, the need for remote and even home monitoring grows. “We believe in precision medicine and work to find out how technology can make patient care even more specific,” Muuranto says. GE Healthcare already had know-how on the production of the wearable solutions and the required algorithms, but with VTT it became possible to upscale and expand the operation.We work with several science institutions globally and VTT’s name and their reputation as a highly qualified and competent organization is well-known. Erno Muuranto, managing and engineering director of GE Healthcare

The long history between VTT and GE Healthcare has also included many projects in data science, such as developing algorithms for monitoring the depth of anesthesia and assessing surgical stress during general anesthesia. Recently VTT has become a clinical research site for new healthcare devices.

VTT brings more to the table than just technology

Muuranto claims that one of the undeniable benefits of working with science institutions such as VTT is that they’re a few years ahead in technology. Almost a hundred VTT professionals have vast expertise in healthcare technology. Muuranto continues: “I appreciate VTT’s experts, the wider perspective their organization provides and their large infrastructure, such as the pilot production facility for printed electronics, which would be too expensive for us to build on our own for a project such as the wearable sensor technology.”

An additional advantage when working with VTT, according to Muuranto, was that VTT has extensive knowledge of EU and other potential financial instruments. “VTT played a key part in us getting a funding for this project back when it started in 2015.”

Another benefit of the long cooperation is VTT’s agility as an organization. “Sometimes in research projects with, for example, universities, there are delicate research plans and changing anything can be difficult. With VTT this has never been a problem,” Muuranto says. The tight cooperation continues and develops continuously towards new innovations.