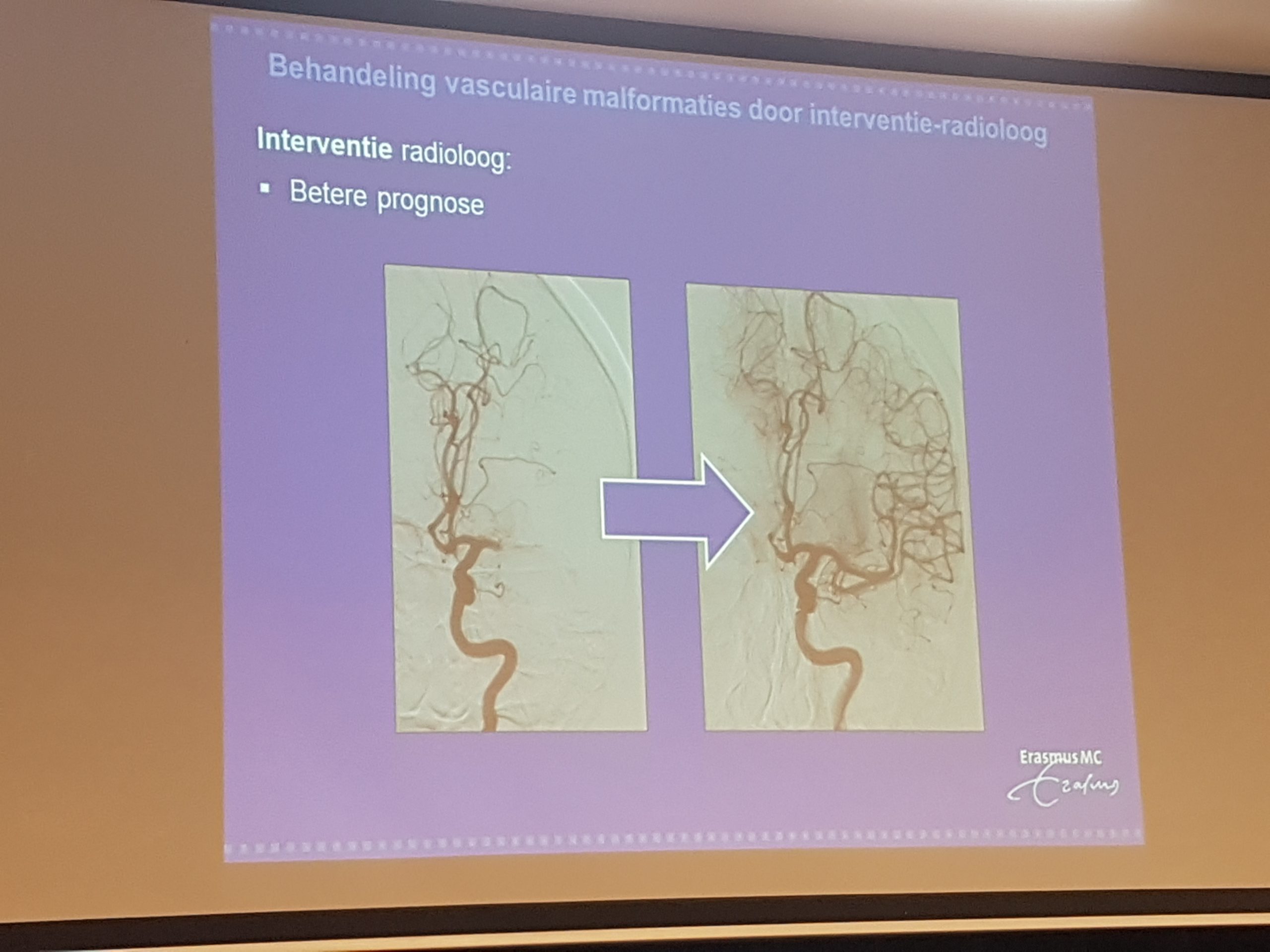 What does an interventional radiologist do? He or she treats various abnormalities in the body through a small opening in the skin, using highly specialized materials and equipment. This minimally invasive treatment uses various imaging techniques (ultrasound, x-ray, CT or MRI).

Tychon Geeraedt is an interventional radiologist and endovascular specialist at Erasmus Medical Center in Rotterdam, the Netherlands. At the annual CMTC-OVM member’s congress on November 3, 2018, he explained about his work and about the treatment of vascular malformations with interventional radiology in particular.

What does an interventional radiologist do? He or she treats various abnormalities in the body through a small opening in the skin, using highly specialized materials and equipment. This minimally invasive treatment uses various imaging techniques (ultrasound, x-ray, CT or MRI). Usually, local anaesthesia is sufficient, however, sedation or general anaesthesia may be required in certain cases. The chances of complications like infection or bleeding are relatively small, recovery time is generally short, and most treatments are outpatient procedures.

Much of the work of interventional radiologist Tychon Geeraedts consists of taking punctures to obtain tissue for further study. One of the imaging techniques that can be used to find the correct location for the puncture is ultrasound. This method uses sound waves (20 kHz-800 MHz, non-audible to the human ear) to obtain images from inside the body. The ultrasound penetrates softer tissues and is reflected by harder tissues such as bone tissue. This way, soft body parts can be made visible, complementing the possibilities of a chest x-ray without radiation exposure. This technique is useful, for example, when taking a puncture, as you can see on the ‘live’ ultrasound images where exactly to take the sample from.

Because of the large amounts of air in the lungs, ultrasound cannot be used for lung examinations, so CT scans are used instead. This technique is also used for the examination of bone tissue or structures deeper in the body.

Apart from taking punctures, a needle can be used to burn away tissue (cancer cells for example) within the body. This technique is called ablation. The needle is heated by ultrasound or microwave waves. Biological ablation is the removal of a biological structure or functionality.

The interventional radiologist also performs catheterisations. Small tubes (catheters) are inserted into a blood vessel (often in the groin or in the wrist) to reach a specific area in the body, after which ultrasound is used to detect the correct blood vessel. Sometimes it is necessary to use a contrast dye to make the blood vessels visible, as you can’t see them on x-rays. The contrast dye is injected in the catheter, this technique of making the blood vessels visible is called angiography. Catheterisation is used to open a blood vessel, for instance, if a blood clot blocks the blood flow (in cases of atherosclerosis). Sometimes a blood vessel needs to be closed in case of haemorrhage. Catheterisation is also used for the treatment of cancer. Particles can be released at the site of the metastasis to close the blood vessels that feed the cancer cells and/or to kill cancer cells. This can be done using radiation therapy (with the radioactive element yttrium) or chemotherapy.

Geeraedts states, “We are endovascular specialists. We ‘travel’ through the blood vessels, as it were, and therefore have knowledge of all of this.”

Geeraerdts treats venous and arteriovenous malformations as well. An arteriovenous malformation (AVM) is a disorder that is caused by an abnormal connection between the arteries and veins. In an AVM the blood flows directly from the arteries to the veins as the network of capillaries is missing. This results in some sort of a short circuit between the artery and the vein in that part of the body, and the high pressure from the artery is transferred almost directly into the draining vein. Because veins have a thin walls, unlike arteries, the blood pressure gradually inflates them, resulting in dilated varicose veins.

A venous malformation is a congenital abnormality of the veins. The walls of the veins are weaker causing the blood vessels to expand.

One of the possible treatments is embolization in which a blood vessel is closed. This can be done with particles, gel foam, coils/plugs and liquid agents such as glue. By injecting glue (histo-acrylic or onyx) in the core of the AVM, the supply of blood is stopped, and the vascular tangle will diminish. If necessary, the sealed and abnormal blood vessel tangle can be removed with surgery.

Another treatment option is sclerotherapy, in which a liquid (sclerosant) is injected in the vascular malformation. The fluid causes the malformation to scar from inside and to shrivel. The malformation will become smaller in many cases.

In some cases, it is not possible to treat the malformation with sclerotherapy or embolisation. Treatment may be more difficult if the malformation is located near important organs for example.

Geeraerdt states, “I mainly treat when the malformation causes pain. Complete removal of a vascular malformation is difficult. Patients have less pain after the treatment and therefore feel better in general. It is hard to say what the optimal treatment is, it varies in each and every case. In our multidisciplinary team, we discuss possible treatments extensively in advance.”

CMTC-OVM is the worldwide non-profit patient organization that aims to improve the quality of life of people suffering from vascular abnormalities (blood vessel abnormalities), such as CMTC (‘Van Lohuizen syndrome’), and stimulate scientific research into these disorders.

Our commitment is to support the welfare, foster well being of our patients and support the scientific research of vascular malformations such as CMTC.The patients in our organisation have the unique opportunity to get the best research of the causes, diagnosis and the best treatment of issues related. We not only support patients but also their families both medically as well as psychologically.

The growth of social prescribing and the future of integrated care with Elemental
Previous post See why 780+ tuned into the #DHSSummit 21! Check out session recordings here!
Next post Read Bleddyn Rees’s interview: What does it take to inspire public trust in health data?