A bike ride with great ambitions 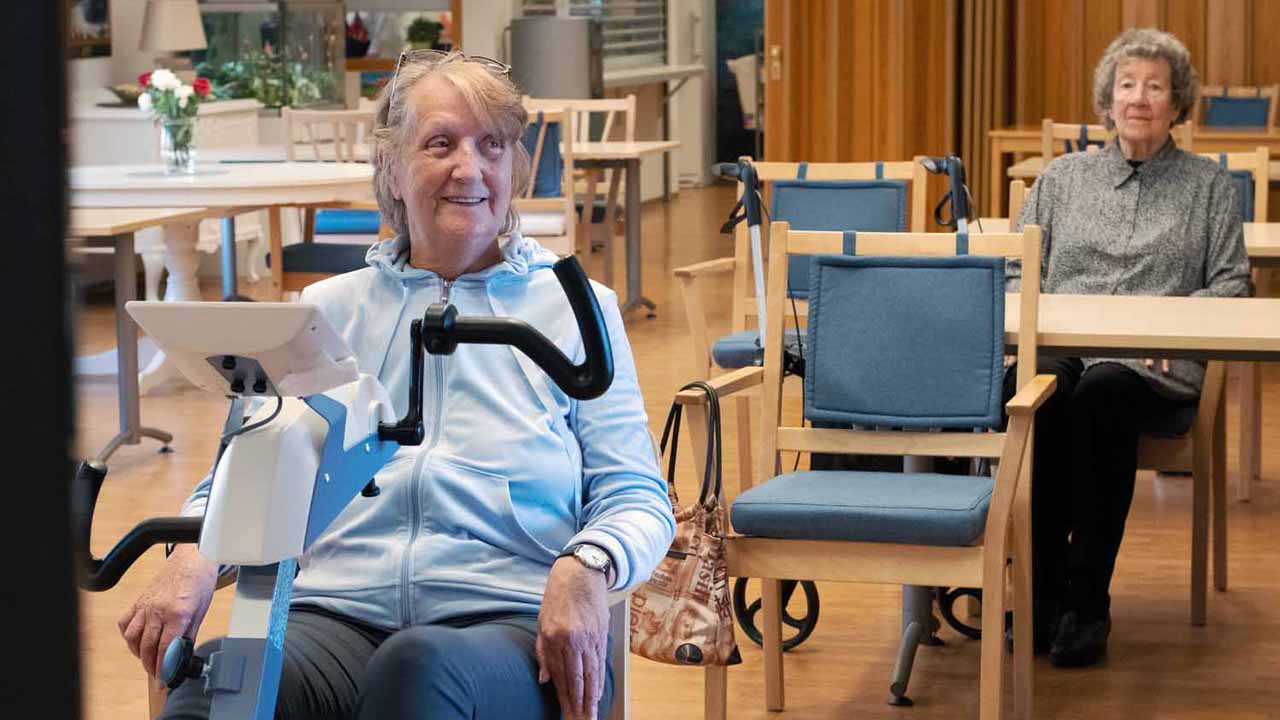 Motiview from the company Motitech – one of many examples of how welfare technology combined with personal commitment provides a better quality of life. At Ramsvigtunet nursing home, they make an impressive effort in the run-up to #roadworldforseniors. In fact, it seems that cycling is very trendy among the elderly in Stavanger municipality in Norway. Motiview from the company Motitech makes this possible. When attention is focused on the abilities instead of what we can not do, something magical happens! This is why you should be passionate about welfare technology. Technology combined with human touch can make a big difference for the individual.

There is a jubilant atmosphere at Ramsvigtunet nursing home in Stavanger in Norway, on something that could have been a normal Tuesday. But this is a special Tuesday. There is a party at the day centre, and a warm-up race for the Road World for Seniors. The cyclists at Ramsvigtunet have cycled 3,692 kilometres in 63 days. The distance is Stavanger – Nordkapp. Such must be celebrated.

It is very nice with a warm-up ride. This is something I look forward to and benefit from, says Kristi Magrete Sondresen.

She is at the day centre at Ramsvigtunet two days a week. Then she always puts in a session on the very special bike that is placed in front of a TV screen. This is Motiview from the company Motitech. The cyclist can sit in a regular chair and cycle. On the TV screen placed in front of the cyclist, the wheels roll across roads from all over the world. Right now, Kristi is cycling through Finland for a trip, on her way home to Stavanger again.

My legs and arms are weak. That is why I train. The big motivation is to throw the walker and travel to visit my grandchild in Trondheim completely without a walker, says the cyclist.

She finds it easier to concentrate on training when she has the TV screen in front of her. Kristi will participate in the World Cycling Championships, but the result is not so important. The important thing is to participate, have fun and be able to throw the “Mercedes”, as she calls her walker.

The cycling adventure among the elderly in Stavanger municipality started with a nursing home that tested the bike.

We received a lot of good feedback from both users and relatives. It was simply a huge success. We have now placed bicycles in almost all nursing homes in the municipality. The users think this is fantastic, says Ruben Hakin.

He is responsible for Motiview in Stavanger municipality’s welfare department. An agreement for 10 bicycles has grown to bicycles in 16 nursing homes, where some have more than one.

We have seen a lot of progress. It is ingenious that the bike is so simple and has such a great effect. At the same time, the scheme is user-friendly for everyone, says Ruben.

He emphasizes several times that an important success factor is that the scheme is rooted in the management, and the commitment of the employees at each individual nursing home.

It is very positive when the nursing homes create internal competitions that promote engagement and activity. It is important to honour the cyclists and fantastic to see the spark of life and their courage.

Ruben refers to how welfare technology builds up under important goals: that the elderly should be able to live longer at home, and live meaningful and active lives.

At Ramsvigtunet nursing home, residents from all over the nursing home cycle, both the nursing home ward, the housing association, and the day centre. The cakes will soon be on the table. There will also be a diploma this festive day, but first there will be a little more cycling.

They are very eager, and have even postponed their dinner to cycle more, says Jorunn Storli, activity manager at Ramsvigtunet nursing home.

In the living room, the cyclists sit in line and wait for their turn. Some are well over 90 years old, with a personal record of 14 kilometres on the bike. These are energetic people, but most important of all is perhaps the mood.

This is so nice, just look at this gang here. They are so positive, says the activity manager.

Last year, this nursing home came in 18th place in the World Cycling Championships. Then they only had one bicycle. Due to great interest, the nursing home received another bicycle from the municipality. Now two people can cycle at the same time.

We look at the motivation when we set ourselves some goals. It is very nice to see how much longer they can cycle after some time with training, says Jorunn.

One of those waiting for a turn is Randi Brattebø. She can boast of 90 years of life experience and the willingness to train.

I look forward to this every day. This makes me feel good. I am here at the day centre five days a week, and cycle every day, says Randi.

She gets up and walks over to the bike. Now it is her turn.

September 6. to October 1. 2021, the stage is set for the World Cycling Championships for the elderly. It was held for the first time in 2017.

Last year we were excited about how things went with covid-19 in mind, we got over 3,000 registered cyclists from 7 countries. It was a huge success for us – considering the pandemic, says Jan Inge Ebbesvik, president of Road Worlds for Seniors.

This year, the organizers have ambitions of 7.000 participants from 10 different countries. So far, the record is from 2019 when 4.300 cyclists from 7 countries signed up. A total of 108.412 kilometres were cycled in the 25 days of the competition.

Covid did not put a stop to us last year, nor will it stop us this year. Last year we were one of only 2 or 3 international championships held! Olympics postponed, European Football Championship postponed, but not the World Cycling Championships for the elderly, says Jan Inge.

He is clearly committed and proud of the international event the company has established with good help from influential partners such as: National Care Forum (UK), Sport England (UK), Care England (UK), the Norwegian Cycling Federation, British Cycling and Cycling Canada.

We want Road Worlds for Seniors to create a feeling of competition with a good community. The competition is unique and contains all elements: competition, personal triumphs, team spirit, social community and new friends, says Jan Inge, and adds:

It is very nice that the Prime Minister has become an annual feature with his greetings to the participants – both in Norwegian and English. We also have other national and local celebrities who come with greetings to the cyclists before and during the championship.

READ MORE: The website for the World Cycling Championships can be found here

MAIN PICTURE – GOAL: Kristi Magrete Sondresen will participate in the World Cycling Championships for the elderly, but is most concerned with getting stronger in the legs. So she can throw the walker.

University of Turku Pentti Malaska Futures Award 
Previous post Galician Health Cluster (CSG) in IN4AHA: Developing a Decalogue of values of technologies with purpose that will be applied on the CSG Living Lab testings of 5 tech/digital selected projects.
Next post 4NoPressure Project – Nursing School of Coimbra