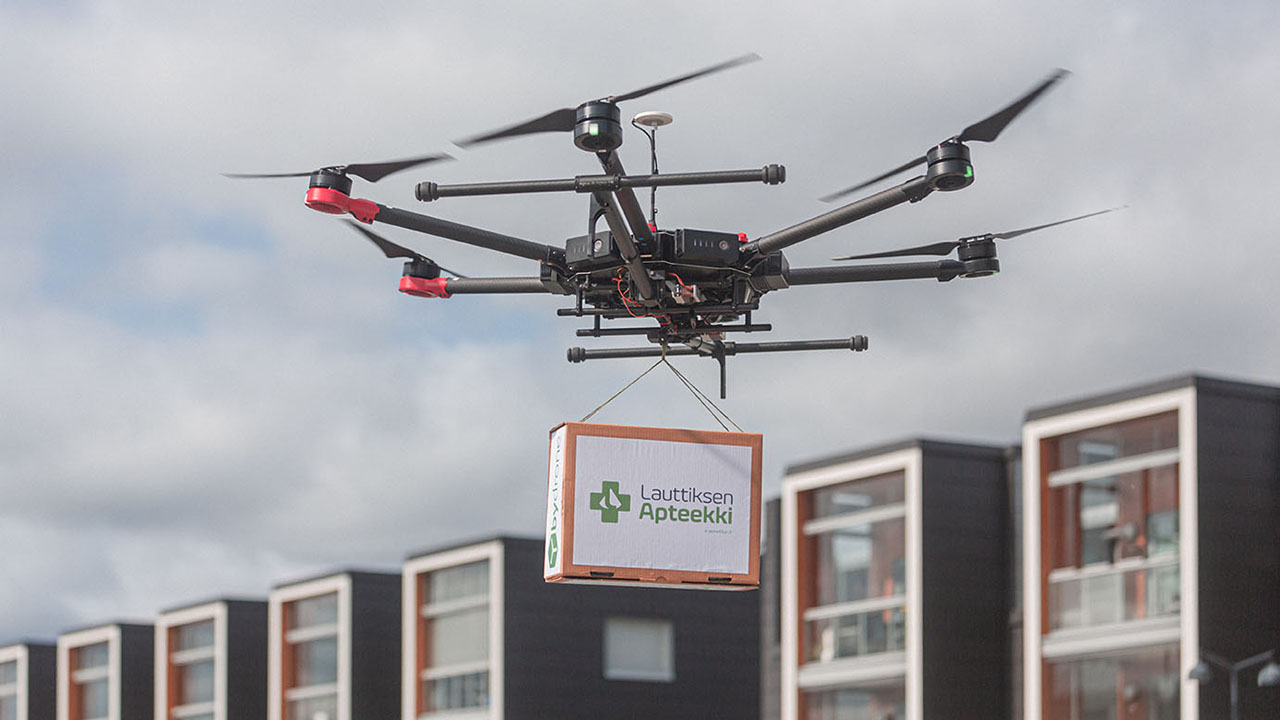 A new way of transporting pharmacy products to customers was tested in Helsinki in August. Electric drones have the potential to reduce emissions of the traditional logistics industry, in addition to other advantages. In the future, drones could be a quick way to transport, for example, pharmacy e-commerce products directly to customers or urgent orders to nursing homes.

In a week-long trial, the products of Lauttiksen Apteekki pharmacy, located in Lauttasaari area, will be flown by drone to Jätkäsaari area. The pharmacy products ordered by the customer are packed in temperature-controlled packaging.

The aim of the pilot is to gather experiences on the suitability of drones for the transport of pharmacy products and to test a new service concept with customers. Electric drones have the potential to reduce emissions of the traditional logistics industry. Other advantages of drones are speed and the ability to make deliveries to locations where there are few services on their own or which are difficult to access, such as islands.

The pilot is part of Jätkäsaari Mobility Lab project, which is coordinated by the City of Helsinki and Forum Virium Helsinki. The goal of the project is to help companies pilot new services and technologies in a real urban environment. Forum Virium Helsinki currently has several parallel projects underway to test drone transports. The projects explore, for example, how drones can be used to help with health care needs. The City of Helsinki will receive information from the experiments on how to prepare for the growth of drone operations in urban planning and what kind of role cities will play as an operating environment for unmanned and manned aerial vehicles in the future.

Quick delivery from the pharmacy to the customer

Lauttiksen Apteekki pharmacy sees new possibilities in drone deliveries, as they enable the customer to be reached quickly, at anytime and without the customer having to go to the pharmacy to do business.

“The tasks of pharmacies are becoming more diverse all the time. Preparing for future requirements and staying at the forefront of development require innovation, product development and willingness to try new technologies. In the future, drones flying in the sky could be a quick way to transport, for example, pharmacy e-commerce products directly to customers or urgent orders to nursing homes. In addition to speed, the drone’s significantly lower emissions compared to traditional transport are also significant factor”, says pharmacist Risto Holma from Lauttiksen Apteekki pharmacy.

A dense urban environment, such as Helsinki’s city center, poses its own challenges to drone deliveries. In the pilot, a consortium of Finnish companies, led by Third Space Automation Oy, is responsible for operating the drones. The team has paid special attention to flight safety in addition to ensuring the integrity and traceability of the cargo.

“We follow the strictest safety regulations and are a team of highly experienced manned and unmanned aviation experts with decades of experience. We are using a commercial grade drone equipped with the maximum level of safety back up systems”, says Arshia Gratiot, CEO of Third Space Automation.

“We designed the ByDrone distribution system used in the trial as a special delivery network for medical products. In the future, we aim to supply e.g. medicines, blood and vaccines, especially to hard-to-reach places that are otherwise difficult to deliver”, Gratiot adds.